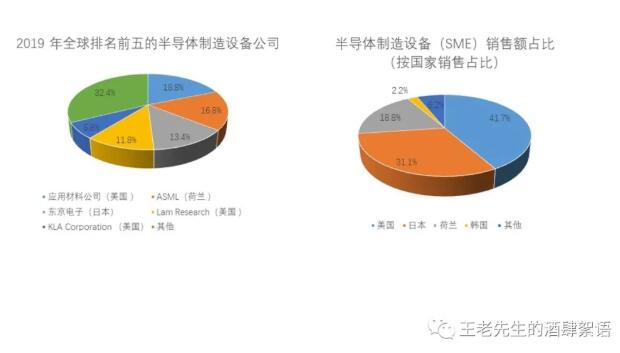 As the chart below shows, while the U.S. has a sizable market share in the production of most front-end SMEs, the notable exception is lithography scan/stepper equipment, which is almost entirely made by Dutch company ASML and Japanese companies Nikon and Canon. For lithography machines, ASML (Netherlands) is the only producer of EUV steppers/scanners, which are critical for the production of integrated circuits with line widths of 5 nm or less. However, only two semiconductor makers, TSMC and Samsung, currently use EUV machines in production, with a single device costing more than $100 million. ASML and Nikon both manufacture deep ultraviolet (DUV) lithography machines that project a beam of light through a photomask and create a scaled-down image of the photomask pattern on the wafer. Outside of the Netherlands and Japan, the US and other countries' share of lithography equipment is mainly for specific low-volume chips or for making photomasks. 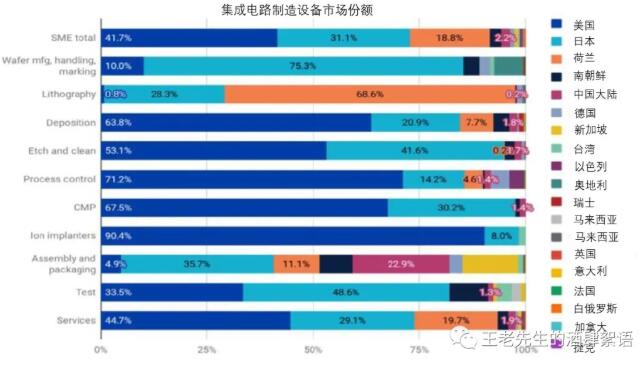 Because of the cyclical nature of sales due to limited markets and customers, most large equipment companies manufacture more than one type of equipment in order to provide customers with a full suite of equipment and maintenance options. Lithography stepper/scanner equipment companies such as ASML are exceptions to this rule due to the unique technology of the equipment. Lam Research, Tokyo Electron (TEL) focus on deposition and etching, while KLA focuses on metrology and inspection.

One exception to the lead in Japan and the Netherlands is MOCVD equipment, which is used to produce semiconductors made from materials other than silicon such as GaN and GaAs, including LEDs, laser diodes and other photonic chips, power/RF devices and solar cells. As mentioned above, GaN chips have strategic defensive implications. MOCVD equipment is manufactured by Veeco (USA), Aixtron (Germany) and AMEC (China). China is trying to gain market share in the MOCVD market through acquisitions. In 2016, the Chinese entity Fujian Grand Chip Investment Fund, a company formed for the deal, including state- and regionally-owned institutions, attempted to acquire Aixtron, but the deal was blocked by President Obama after a review by the Committee on Foreign Investment in the United States (CFIUS), potentially of the acquirer abandoned the takeover offer.

The top three companies for etching equipment are Lam Research (US), Tokyo Electron (Japan), and Applied Materials (US). Chinese companies, including AMEC, have some expertise in etching and can provide equipment for low-end applications, however, their market share is only around 1%.

(3) Semiconductor manufacturing equipment, the risk of the United States

Chinese subsidies for the production of semiconductor manufacturing equipment distort the market:


Previous:How Citigroup views the security of its semiconductor supply chain (Part 3: Assembly, Test and Packaging and Advanced Packaging)
Next:When can Chinese semiconductor catch up with the world level? Chen Datong's answer is ...