Perspectives
Perspectives
home -Perspectives -Others -The latest revenue ranking of foundries came out in the second quarter, with output of $24.407 billion

The latest revenue ranking of foundries came out in the second quarter, with output of $24.407 billion

According to TrendForce, post-pandemic demand, communication generation shift, geopolitical risks and panic stocking caused by long-term shortages continued to spread in the second quarter, and driven by the continuous output of the first quarter's rising prices, foundry output reached $24.407 billion in the second quarter, up 6.2% since the third quarter of 2019. It has set new highs for eight consecutive quarters. 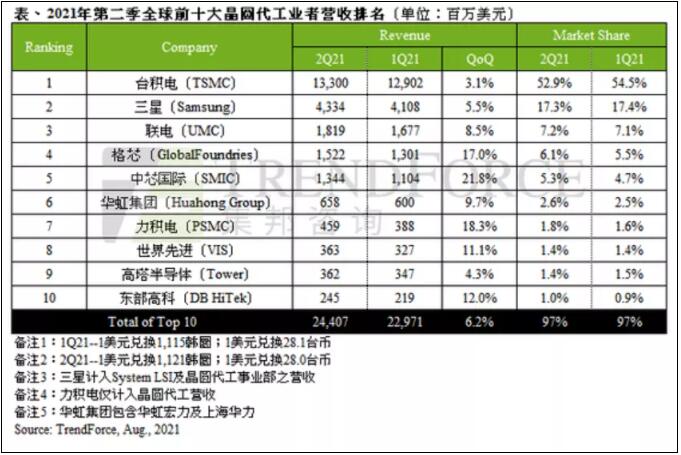 TSMC's second quarter revenue was $13.3 billion, up 3.1 percent, firmly in the lead. As TSMC maintained a consistent and stable bidding strategy, revenue performance in the second quarter was higher than the top of the forecast, but the quarterly growth was slightly lower than other founds, which slightly eroded its market share. Sales rose 5.5 percent to $4.33 billion in the second quarter. Although second-quarter output was slightly affected by a sharp drop in shipments in the first quarter, Samsung's sales were boosted by strong shipments of CIS, 5G radio transceivers and OLED driver ics. Umc, ranked no. 3, benefited from PMIC, TDDI, Wi-Fi, OLED driver IC and other demands, the capacity is seriously in short supply, continued to increase the price of customers, coupled with the higher price of 28/22nm new capacity opened one after another, led to the second quarter average selling price increased by about 5%, revenue reached 1.82 billion DOLLARS, a quarterly increase of 8.5%. The market share was roughly flat at 7.2%. Revenue rose 17.0 percent to $1.52 billion, putting The company in fourth place. Smic's second-quarter revenue grew 21.8 percent to $1.34 billion and its market share also rose to 5.3 percent. The main driving force came from the strong demand for MCU, RF, HV, CIS and other processes, and the same continued increase in wafer prices, plus the progress of 14nm new customer introduction was better than expected. Huahong Group ranked sixth with $660 million in second-quarter revenue, up 9.7 percent. After surpassing High Tower semiconductor in revenue for the first time in the first quarter, LJIC maintained strong growth momentum in the second quarter, with $460 million in revenue from Specialty DRAM, DDI, CIS and PMIC products, as well as a sharp increase in demand for IGBT and other automotive products. A quarterly increase of 18.3 percent, ranking seventh. Driven by the demand for DDI, PMIC and separated components, as well as the opening of new capacity in Singapore, product portfolio adjustment, and the continued increase in average unit sales, World Advanced's revenue increased by 11.1% in the second quarter, surpassing Hightower Semiconductor for the first time to reach us $363 million and ranking eighth.


Outlook for the third quarter, the foundries capacity utilization is generally maintain full water level, and sustained demand, combined with vehicle chip, a sharp increase in the volume cast slice, expanding capacity crowd out strength, cause the wafer foundry renew the average selling price of young, TrendForce believes that in the third quarter, the top 10 wafer foundry production will record, and growth season will be even better in the second quarter.

Disclaimer: This article is reprinted from "ITTBank", this article only represents the author's personal views, does not represent the views of Sakweiwei and the industry, only reproduced and shared, support the protection of intellectual property rights, please indicate the original source and author, if there is infringement, please contact us to delete.


Previous:Easy introduction to Embedded Systems (1) - What is MicroPython?
Next:Hao Yue, academician of Chinese Academy of Sciences: the development of wide-band semiconductors can not only be used without innovation