Perspectives
Perspectives
home -Perspectives -Others -How does Citigroup think of the safety of its semiconductor product supply chain (one: integrated circuit design enterprise)

How does Citigroup think of the safety of its semiconductor product supply chain (one: integrated circuit design enterprise)

[Introduction] In February 2021, Citigroup President Joe Biden signed Executive Order No. 14017, requiring his government to conduct a comprehensive review of supply chains in four major fields, including semiconductors, new energy batteries, rare earth minerals, and medical supplies, to identify risks, address vulnerabilities, and develop strategies to improve supply chain resilience. When the commander signed the order, he quoted the proverb "For lack of nails, the shoe is thrown away. For lack of shoes, the horse is lost," and so on, until the kingdom fell. The smallest glitch in the supply chain can affect American safety, jobs, families and communities. To carry out this comprehensive review, the Biden administration created an internal task force covering more than a dozen federal departments and agencies. Administration officials have consulted with labor, business, academic institutions, Congress, and U.S. allies and partners to identify vulnerabilities and develop solutions.

Citi State's review assessment report is due in June 2021.

Semiconductors are the material basis of integrated circuits that are essential to modern daily life. Semiconductors are an integral part of the daily lives of modern consumers, found in household items such as light switches, garage door openers and refrigerators, as well as in mobile phones, computers, and automobiles. It is found in more complex products. Modern people use it every day (say every hour, every minute, every second). Semiconductor-based integrated circuits are the "DNA" of a variety of technologies that have fundamentally changed all areas of the socioeconomic, from agriculture, transportation, healthcare, telecommunications and the Internet. The semiconductor industry is a major engine of economic growth and job creation at Citi. Almost all technological products are inseparable from semiconductors; of course, the most advanced military systems are also inseparable from the support of semiconductors.

Although the U.S. semiconductor industry accounts for nearly half of global semiconductor product revenue, the assessment report believes that U.S. semiconductor manufacturing capacity as a share of global production has fallen from 37% 20 years ago to around 12% today. U.S. businesses, including major fabless semiconductor companies, are heavily dependent on foreign countries, especially in Asia, which creates supply chain risks.

For relatively low-tech back-end semiconductor packaging and testing, the United States relies heavily on foreign resources concentrated in Asia. Furthermore, as chips become more complex, advanced packaging methods represent a potential area of development for major technological advancements in the future. The U.S. lacks the necessary materials ecosystem, and the U.S. is not a cost-effective location to develop a robust advanced packaging industry, and heavy Chinese investment could upend the market.

The production of semiconductors requires hundreds of materials, creating challenges for the manufacturing supply chain. Many gases and wet chemicals used in semiconductor manufacturing are produced in the United States, but foreign suppliers dominate the market for silicon wafers, photomasks and photoresists.

In addition to lithography machines, for most semiconductor manufacturing front-end process equipment, American companies have a large share of the world.

Although barriers to entry are low, fabless design companies must work closely with foundries to ensure designs are suitable for the production process, and they rely on IP suppliers (usually other semiconductor companies developing key technologies), as well as electronic designs Automation (EDA) software enterprise support. Both the upstream and downstream stages of the IC design industry are highly concentrated. Significant IP providers and EDA providers are primarily headquartered in the United States, but most of their practitioners are located outside the United States. 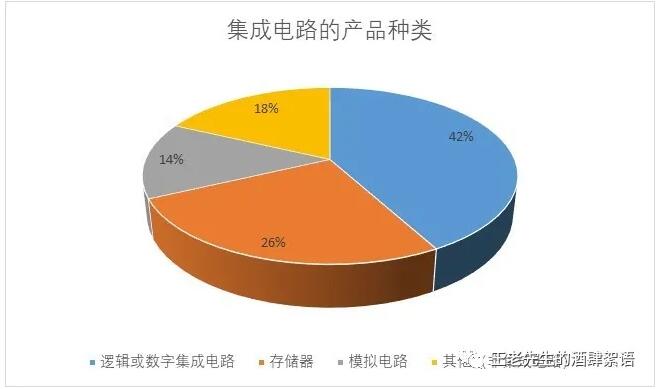 Logic or digital integrated circuits are the basic units of computers or computing components and are the largest category in the semiconductor product market. Logic chips account for 42 percent of industry revenue, according to the World Semiconductor Association SIA. In this category of semiconductor products, the market concentration and the number of design companies are highly dependent on the specific chip type. The personal computer central processing unit (CPU), dedicated graphics processing unit (GPU), and field programmable gate array (FPGA) markets are essentially duopoly. The suppliers of application-specific integrated circuits (ASICs) are very fragmented, and their competition is more intense. Product categories include ASIC and ARM-based mobile device processors. A CPU is a computer's central processing unit, a GPU is a processor used for video rendering, an FPGA product is used for configuration by a customer or designer after manufacturing, and an ASIC is a custom chip designed for a specific application.

The report believes that the United States is the world leader in integrated circuit design, and many companies use outsourcing manufacturing or placing designers outside the United States to reduce capital expenditures. Basically, all personal computer CPUs in the world are designed by American companies Intel and AMD, among which Intel completes chip manufacturing in-house, while AMD relies on foundries to complete chip manufacturing. Meanwhile, Intel and AMD may soon dominate the FPGA category, as AMD announced in October 2020 that it planned to acquire FPGA market leader Xilinx for $35 billion. If the acquisition gets regulatory approval, AMD-Xilinx and Intel would account for about 85 percent of global FPGA sales. Other US suppliers Microchip Technology, Lattice Semiconductor and Achronix Semiconductor make up the remainder of the FPGA market. The major share of the global GPU is held by AMD and the market-leading US company NVIDIA.

Competition in the ASIC supplier base has increased significantly, and demand for ARM architecture-based mobile device processors is high. Chipmakers such as Samsung compete in the ASIC and mobile processor markets alongside fabless design firms such as Qualcomm and Broadcom, and dozens of U.S. tech companies that design their own chips, including Apple, Alphabet and Amazon. With the exception of Intel and Microchip, most CPU, GPU, FPGA, and ASIC suppliers globally and in the U.S. are fabless, relying on foundry manufacturing to design chips.

According to SIA, memory chips used to store information needed for computing account for 26% of industry revenue. Memory chips are fully commercialized and competitive categories, and their benefits and technological progress are entirely dependent on yield and economies of scale. Memory products are usually provided by IDM-type companies. South Korea's Samsung and South Korea's SK Hynix are in the leading position in the field of dynamic random access memory (DRAM). U.S. company Micron has about 23 percent. The market share leaders are now developing advanced packaging technologies (i.e. die stacking) and IP for other leading products. These three companies account for roughly 95% of the global $70 billion market in 2020.

Flash memory (NAND) production is less concentrated, with an estimated six companies accounting for about 99% of the $47 billion global market in 2020. South Korea's Samsung is also the market leader in flash memory products, with just over a third of the NAND market. South Korea's Samsung is followed by Japan's Kioxia (formerly Toshiba), which has a roughly 20 percent share. The third place for flash memory products is Western Digital Corporation of the United States, accounting for about 14% of the share. Also in this segment are SK Hynix in South Korea (12%), Micron in the US (11%) and Intel in the US (9%). Global NAND companies appear to be gearing up for further consolidation. Intel, whose NAND product revenue is similar to Micron, announced in October 2020 that it planned to sell most of its NAND memory business to SK Hynix. The sale will propel the combined company to No. 2 in NAND market share. There are also reports that Western Digital and Micron may be looking to acquire Kioxia. In addition, Yangtze Memory Technologies (YMTC), a Chinese company founded in 2016, is expanding rapidly and has received about $24 billion in subsidies. Chinese government sources. The company could be capable of producing as many as 200,000 wafers per month by 2022, more than double Intel's current NAND capacity, and a potential low-cost threat to U.S. memory companies.

In 2020, global sales of discrete devices, optoelectronic devices and sensors (non-integrated semiconductors) in semiconductor products will be approximately $79 billion, accounting for nearly 18% of the total semiconductor market (total approximately $440 billion). Most semiconductor products in this category are in mature process nodes where they are cheap and it is not uncommon for a single product to be worth a penny. The market for such products is highly fragmented with numerous manufacturers. Non-IC semiconductor companies include ABB Ltd. (Sweden/Switzerland), Infineon Technologies (Germany), STM Microelectronics (Italy/France), Toshiba (Japan), as well as US companies Diodes Inc., Vishay Intertechnology, Qorvo, dPix and Cree. The key driving technologies for non-integrated semiconductor products, especially discrete power semiconductor products, are innovations in power management and miniaturization. Such products use automobiles, especially electric vehicles, as key application terminals. U.S.-dominated gallium nitride (GaN), silicon carbide (SiC), and other compound semiconductor substrates are key technologies for a variety of applications. They are widely used in power management and distribution, high frequency power amplification, optoelectronics, and national security. Flat panel display semiconductor devices also fall into this category.

In the field of national security, semiconductor technology must also qualify for use in the military temperature range (extended range) and harsh environments, including technical characteristics for use in radiation environments where appropriate. In addition, more stringent and independent component verification and validation is required. Semiconductors used in automotive applications also must meet stringent durability and testing requirements to withstand harsh environmental conditions (eg extreme cold, extreme heat and extreme humidity). They must withstand vibration and shock throughout the vehicle's 10- to 20-year life expectancy, and have demonstrated much lower failure rates in tests than semiconductors used in consumer products to ensure they meet vehicle safety requirements. These requirements are expected to increase and become more stringent as vehicles become more autonomous and employ more and more light detection and ranging (LiDAR), sonar, radar, vision systems, and navigation and identification technologies.

Disclaimer: This article is reproduced from "Mr. Wang Lao's Wine Restaurant Whisper". This article only represents the author's personal views, not the views of Saco Micro and the industry. It is only for reprinting and sharing, and supports the protection of intellectual property rights. Please indicate the original source and author for reprinting. , if there is any infringement, please contact us to delete it.