(I) Citigroup's basic estimates of the IC manufacturing industry

Of these diverse applications, about 9% directly support national security and critical infrastructure applications. These key semiconductor product end-uses include defense and aerospace, telecommunications networks, energy and utilities, healthcare and financial services. Defense and other government uses account for just over 1 percent of global semiconductor consumption. 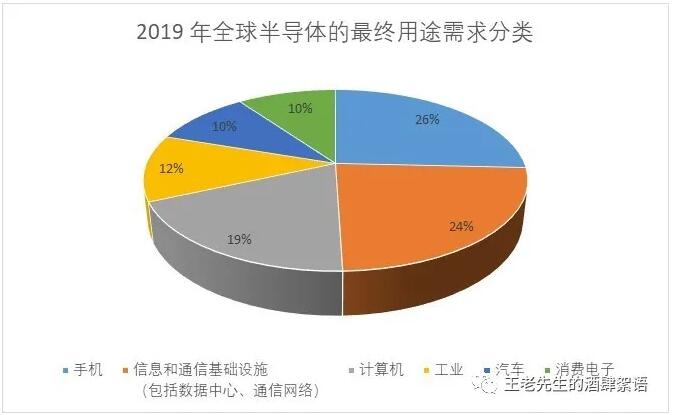 The US share of global semiconductor production has fallen from 37 per cent in 1990 to 12 per cent today, and is expected to decline further without a comprehensive US strategy to support the industry.


U.S. Manufacturing capacity is inadequate: U.S. manufacturing capacity has been declining for decades. The first decade of this century was particularly devastating for US manufacturing, with a third of manufacturing jobs lost between 2000 and 2010. Small and medium-sized enterprises (smes) have been particularly hard hit. Part of the decline can be attributed to competition from low-wage countries. Economists estimate that about 25 percent of job losses can be attributed to the rise of China, especially after the country joined the World Trade Organization. But the US has also seen domestic productivity growth stagnate compared with its economic peers, for example, lagging behind Germany on average and in most industries. Today, small businesses in the United States are typically less productive than large manufacturers. Contrary to popular belief that ARTIFICIAL intelligence and robotics are just around the corner, US manufacturers of small and medium-sized businesses are underinvesting in new productivity-enhancing technologies. The loss of manufacturing capacity leads to the loss of innovation capacity. Manufacturing capability is the foundation of product innovation. Once innovation capability is lost, it is difficult to rebuild. When INTEGRATED circuit capacity has moved overseas in recent decades, research and development and the broader industrial supply chain have often followed.

From design to packaging to integration into the final electronic products purchased by customers, the industrial chain is extremely complex and geographically dispersed. A typical semiconductor production process includes multiple countries and products may cross international borders 70 times due to the firm's specialization in specific links. The whole process takes up to 100 days, of which 12 days are transferred between the links of the supply chain. The following is a simple representation of the supply chain.

The small size and light weight of semiconductor products are important factors in achieving such a complex cross-geographical supply chain. The cost of shipping semiconductor products is low compared to their value. However, it also means that disruption of transport routes can pose a risk to the supply chain. Various forms of transport (e.g., air, sea, truck) need to be used in the chain, depending on the stage and the distance to be travelled, as well as the nature of the product. In some cases, transportation also requires specialized handling, such as handling hazardous and high-purity gases and chemicals used in manufacturing, or protecting sensitive electronic equipment from damage.


As technology advances and the cost of building and maintaining state-of-the-art semiconductor manufacturing facilities skyrockets, the fabless enterprise + foundry business model is becoming more common. Continued advances in chip manufacturing technology require entirely new and increasingly expensive manufacturing equipment. State-of-the-art fabs (at 5nm process nodes) cost at least $12 billion. A single extreme Ultraviolet (EUV) lithography machine, which is required at 5 nm or below and often used at 7 nm, can cost as much as $150 million. In addition to photolithography machines, fabs require many other types of equipment. It is estimated that the investment needed for the next generation of fabs, which will operate on 3nm nodes, could exceed $20bn. In addition, after the establishment of new fabs, operating costs will be very high and require continuous and expensive capital investment; It is also necessary to maintain the cutting edge technology required by process designers to keep operating at the most advanced production nodes. Pure foundries benefit from economies of scale that allow them to absorb and absorb the huge costs of semiconductor plants with high and efficient capacity utilization. Pure foundries account for about a third of global chip capacity, according to the SIA. Among them, logic chip production accounted for nearly 80%. Taiwan Semiconductor Manufacturing Company (TSMC), the world's first pure wafer foundry, was founded in 1987 and dominates the foundry market today.


The contract manufacturing market is dominated by Taiwanese companies, with TSMC alone accounting for 53 per cent of the market. Overall, Taiwanese foundry companies account for 63 per cent of the global foundry market. South Korea accounts for 18% and China for 6%. GlobalFoundries, a U.S.-based, ABU Dhabi-owned foundry, has a 7 percent share, accounting for more than half of the remaining 13 percent of the foundry market.

As mentioned above, although the US has a large market share in chips produced by IDM enterprises, it accounts for only about 10% of global foundry revenues. Asian foundries account for about 80% of the total. Taiwan alone accounts for 63 per cent of global contract manufacturing. That means that while the U.S. is a leader in semiconductor design, its domestic fabless companies rely heavily on foreign contract manufacturers, mostly in Asia, to make their products. Although this agent-business model is suitable for integrated circuit products for high-volume commercial applications, many defense-related applications are in small batches, which makes the adoption of advanced semiconductor manufacturing technologies for defense applications uncertain and challenging.


For the United States, the vast majority of semiconductor manufacturing (in both IDM and foundry models) is done abroad: Taiwan, South Korea, Japan, China and the United States. About 12% of the world's semiconductor manufacturing capacity is located in the United States, down from 37% in the 1990s. In 2019, Taiwan accounted for about 20% of global installed capacity, followed by South Korea with 19%. Japan accounted for 17 per cent, China 16 per cent and Europe 9 per cent. The remaining 6% of capacity is located in Singapore, Israel and other parts of the world.


Of the 40 major semiconductor manufacturing facilities located in the United States, half (20) use 300 mm (12 inch) wafers; Other production uses wafers of 200 mm (8 inches) or less. Between 2009 and 2018, more than 100 150-200mm wafer manufacturing plants closed worldwide, with 70% of the closures in the US and Japan. According to IC Insights, as many as 68 wafer manufacturing plants are decades old, beyond their reasonable lifespan. Closed fabs are partly replaced by new facilities that are more cost-effective or upgraded; There are also some fabs that are too expensive to operate, and companies are turning to light fabs or fabless business models

Domestically, six companies operate 20 300 mm fabs in eight states, as detailed in the table below. In addition to Skorpios, five other companies also operate wafer factories outside the US.


As noted above, Intel has semiconductor manufacturing operations in Israel, Ireland and China. In addition to its fabs in the United States, Micron operates fabs in Singapore, Japan and Taiwan. Texas Instruments has wafer production in China, Malaysia, Taiwan and the Philippines, as well as in Texas. GlobalFoundries is the leading pure wafer foundries in the U.S. it is owned by the emirate of ABU Dhabi through sovereign wealth fund Mubadala and has wafer manufacturing facilities in Germany and Singapore. In 2019, the company canceled plans to open a fab in Chengdu, China. 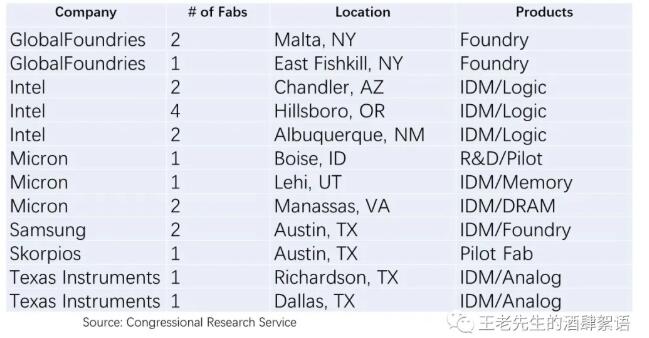 While U.S. chip manufacturing capacity is relatively stable, capacity and production outside the U.S. is growing, especially in Asia. As a result, SIA forecasts that the US share of semiconductor capacity will fall to 10 per cent by 2030, while Asia's share will grow to 83 per cent. In 2019, none of the six new semiconductor manufacturing facilities opened in the world were in the United States, but four were in China.


As discussed in the "Design" section of this report, three main types of chips are covered: memory, logic or digital, and analog. As the chart below shows, different parts of the world specialize in different areas. For example, only 5 percent of memory chips are produced in the United States, compared with 44 percent in South Korea and 14 percent in Mainland China. In memory, China focused on the rapid expansion of Changjiang Storage, allocating $24 billion in subsidies to the company (for its Wuhan plant alone). Its expansion and low-priced products pose a direct threat to MICron and Western Digital, US memory chip makers. 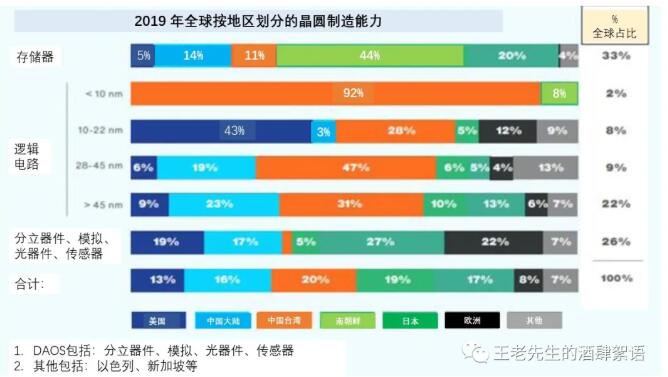 In logic or digital chips (such as computers and mobile phone microprocessors), the US does not produce any advanced process nodes (less than 10 nanometers), while Taiwan has 92 per cent. In other logic lock technology, the United States is very leading: 43% of the most advanced (10-22 nm) logic chips, and 6% to 9% of the previous generation (28 nm and above) logic chips are produced in the United States; Taiwan produces 47 percent of such logic chips, while China produces roughly 19 to 23 percent of logic chips. Finally, for the analog/discrete component segment, 19% are produced in the United States, 17% in China, and approximately 27% in Korea.

The United States lacks production capacity at the most advanced technological level:

The U.S. lacks semiconductor production capacity for the most advanced semiconductor process nodes (currently 5 nanometers), which are currently operated only by TSMC (Taiwan) and Samsung (South Korea). The most advanced FAB in the United States is the 10-nm process line operated by Intel, which is not expected to enter full 7-nm production until 2023, and announced in January 2021 that it would use TSMC's "enhanced" 7-nm or below production line for its latest logic circuit products. As a result, US fabless chip companies now rely almost entirely on Asian producers, especially TSMC, to produce the most advanced chips (7nm or smaller). In addition to supply chain risks caused by geographically concentrated production, the lack of state-of-the-art domestic technological capabilities raises national security concerns, as some military applications require secure access to state-of-the-art process technology to ensure technological superiority.


Revenue from sales of chip products depends on China:

American chipmakers also rely heavily on sales to China because of its dominance in electronics production. China is the largest market for semiconductors, most of which are re-exported as they are assembled into terminal electronics, including consumer electronics and appliances. For example, mobile phone chip supplier Qualcomm got two-thirds of its revenue from China, while memory maker Micron got 57% of its revenue from China, according to 2018 data from The Economist. Intel reported in 2020 that China accounted for 26 percent of its revenue. Heavy reliance on Chinese sales provides the Chinese government with economic leverage and the potential to retaliate against the United States.

China's share of the global semiconductor industry is relatively small, and its companies mainly make low-end chips. SMIC, China's most advanced pure foundries, can only produce on 14-nanometre nodes and has limited capacity. However, China is in the midst of a major state-led effort to develop its indigenous vertically integrated IDM industry, with the goal of making the industry a leader in all fields by 2030. China's share of semiconductor wafer capacity stood at 16 percent in 2019 but is expected to grow to 28 percent by 2030. The Chinese government is providing $100bn in subsidies for its semiconductor industry, including the development of 60 new manufacturing plants. As discussed in the "design" part of the supply chain, China has aggressively subsidized its own memory chip makers to break its dependence on the world's three largest memory companies: Samsung (South Korea), SK Hynix (South Korea) and Micron (US). Micron, a US memory company, is a direct competitor of Changjiang storage and is likely to be the first US company to see its future competitiveness and innovation threatened by Chinese subsidies to its competitors.

Disclaimer: This article is reprinted from "Mr. Wang's Restaurant talk", this article only represents the author's personal views, does not represent the views of Sakwei and the industry, only to reprint and share, support the protection of intellectual property rights, reprint please indicate the original source and author, if there is infringement, please contact us to delete.


Previous:Hao Yue, academician of Chinese Academy of Sciences: the development of wide-band semiconductors can not only be used without innovation
Next:How Citigroup views the security of its semiconductor supply chain (Part 3: Assembly, Test and Packaging and Advanced Packaging)